skip to main | skip to sidebar

I have a new home (I think)

With help, guidance and recommendations from several friends, this blog will continue at http://landshipenterprise.wordpress.com  Thank you, all.

I truly value the comments that have been coming in.  Understand that I do not want to stop the blog. I made the decision I did because 1) Google screws with my photos, and 2) Google began charging me for photo space.  That made the blogging something that was a source of irritation and frustration, rather than being a joy shared.

If anyone knows of another blog host where I could resume my blog or begin a new one, please email me or, if you don't have my email, leave a comment, to steer me there.

I guess my real issue is that I am done with Google Blogspot.
Posted by Ken at 7:19 PM 6 comments:

I started this blog in 2008 to let family and friends stay aware of where I was, and to share with them the beauty I was seeing.  Well, no family member has been to this site in years.  That is blow number one.

Second, in the past 6 months, my blog has been visited a grand total of 19 times, or on average, about 3 visits per month.

Third, the purpose of the site evolved, becoming a site where I posted photos tied to a story.  That meant that the quality of the photos became very important.  And - Google alters the photos when I upload them.  Sometimes, often in fact, the alterations are not significant.  Sometimes it is a big deal. I have found myself not selecting my best photos because I know that Google's automatic processing will ruin the shot.  I have reached out to Google three times, asking that they at least provide us with the option of them "adjusting" the photo or posting it as is.  They have not had the courtesy to reply.

Finally, Google has started charging me for photo storage.

As Google alters my photos, I view those photos as becoming Google's, not mine.  I have decided to not pay for the storage.

So, for those few who still come in to look now and then, thanks.  I appreciate the interest you have shown.  This is my last blog post, and I wish you happy travels.

These are a few of my favorite things...

Some people like pics of flowers.  For some, it is people.  My hiking buddy likes patterns and textures, and old, rusty agricultural equipment out in a field.  Me?  I like waterfalls and sunsets.  Sitting down in a valley where I am, flanked by mountains to the east and west, good sunsets here are unusual.  Today, I drove up to the southwest corner of Yellowstone to explore that area.  There, I found Cave Falls. 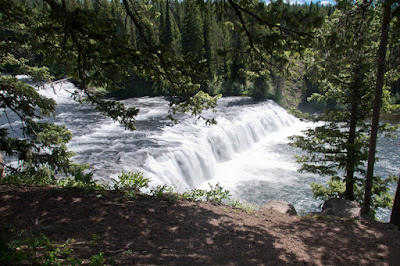 Leaving there, I drove a little further north to the Mesa Falls area.  Lower Mesa Falls is viewed from an overlook high above. 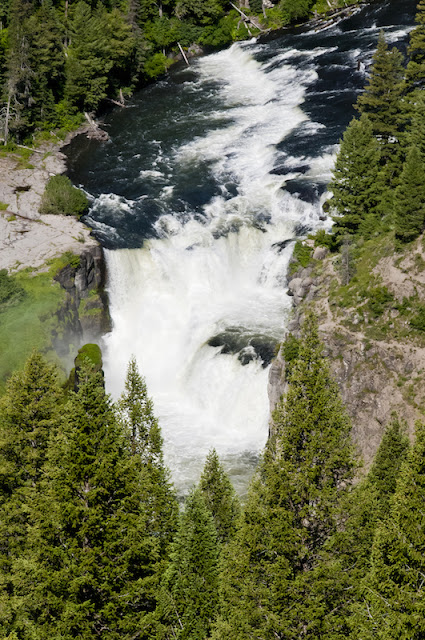 There is a trail there that gets one down to the falls, but I could find no info on it - where it started, how long it was, etc.  So, I left there and went to Upper Mesa Falls. 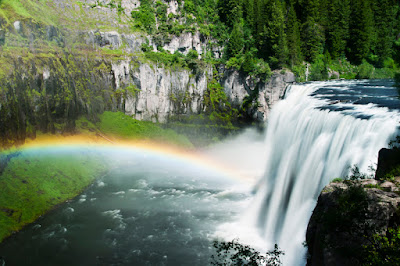 Driving back, I surrendered to iconic farm structure - crop field photography because of the colors.

Fooling around with black and white... 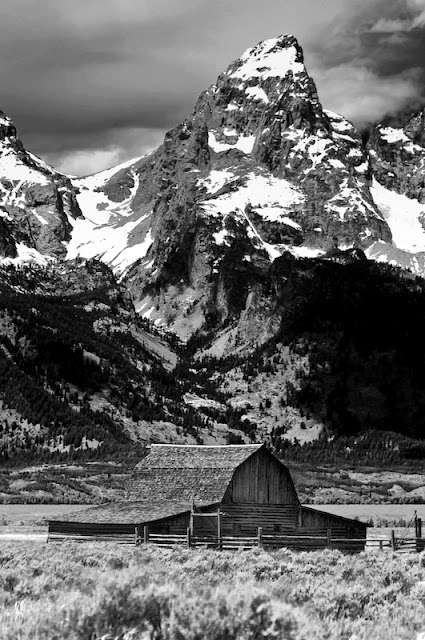 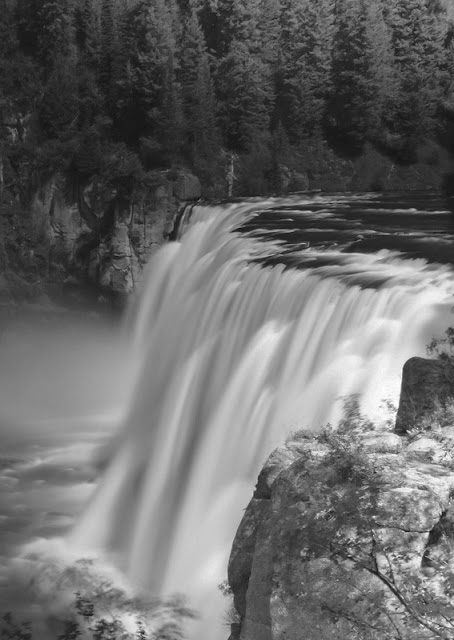 A bit of Idaho

For several weeks I have been wandering about Idaho, often with no internet service.  I began on the southwest part, driving Rt 55 from Emmett to McCall, then driving 95 from McCall to Grangeville.  Route 55 followed the Payette River.  Rt 95 near New Meadows followed the Little Salmon, a wild river with tons of rocks and a fast drop.  It joined the Salmon River, way over on the west side of the state near Hells Canyon.

When 95 left the Salmon River, it climbed to a plateau above a massive, green valley and wilderness to the southeast. 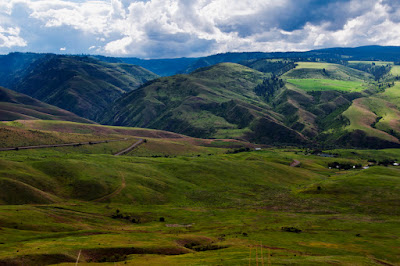 I joined Rt 12 and followed it across the state, first along the Clearwater River, then more northerly along the Lochsa River.  The Lochsa is known as a renowned white water stream.  It deserves that title. The calmer portions are simply iconically beautiful mountain river scenery. 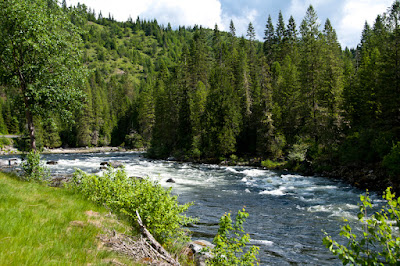 The wilder stuff, well, a photo just won't do it justice.  I tried.  What I DID do, though, is take a short hike to Snowshoe Falls.  The trail begins in dense forest. 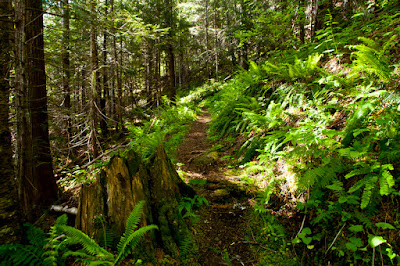 It turns, emerging from the forest, bordered now with wildflowers. 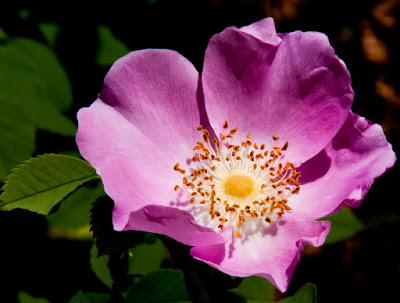 Finally, it drops to a stream crossing just below the falls. 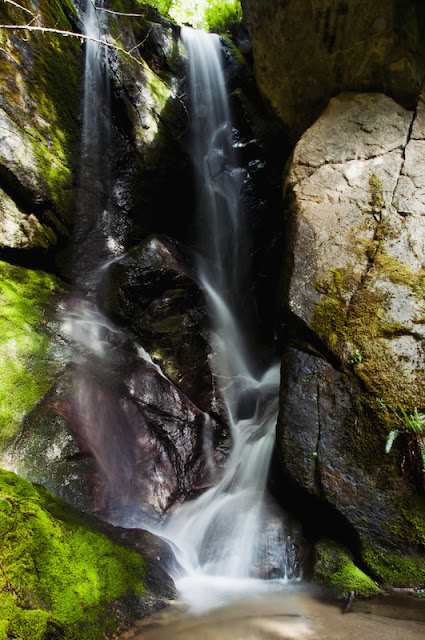 Reaching Montana, I took 93 south into Idaho again, where I re-entered the Salmon River watershed.
The Salmon River begins in the Sawtooth Wilderness, south of Stanley.  Red Fish Lake, near the Salmon headwaters, is a salmon spawning area.  I can't imagine the energy expenditure involved in climbing the Columbia River to the Snake River, the Snake to the Salmon River, then the Salmon River east all the way across Idaho, through the River Of No Return Wilderness, climbing rapids most of the way, then turning south to continue climbing past Stanley to these spawning beds.  For me, I was tired driving a small part of that distance, with frequent rests.  The views, though, are magnificent, as in this shot of Red Fish Lake. 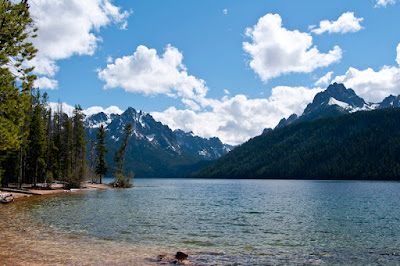 That brings me to a subject near and dear - photographers.  I have has people praise my work and compare me to professionals.  I know professionals.  Jan and James, Charles and MaryBeth, get up before dawn, travel to a spot they have scouted, and hunker down in damp and cold, waiting for perfect light.  They are professionals.  Me, I am lucky enough to be able to perch in a nice spot and, if fortune smiles on me, I grab my camera, walk outside, and snap a photo.  Such was the case at the Sawtooths.  I needed a place to sleep, and pulled into the Mountain View Campground near Red Fish Lake.  In the late afternoon, I was given this view. 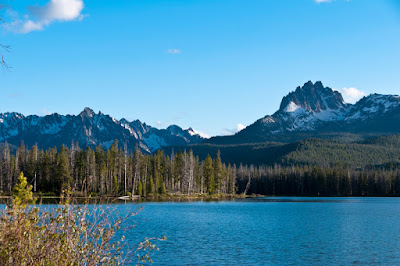 When I awoke this morning, it was even better. 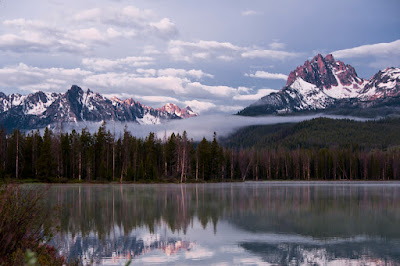 That's the key difference for me.  Hang something beautiful in front of me, and I often can capture it. The professionals go out and find the beauty, putting themselves through effort and discomfort to be in the right place at the right time, rather than depending on luck, like I do.  my hat is off to them.

I am hanging out near Newport for a while.  While here, I did some late afternoon and sunset exploration of the coast south of here.  About 30 miles away is Cook's Chasm.  The Pacific Coast Highway crosses the chasm on one of the classic concrete arch bridges. 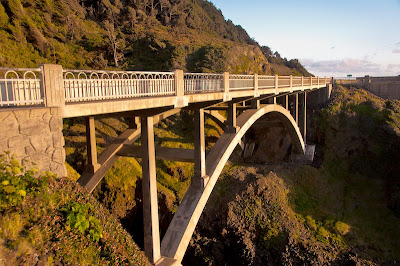 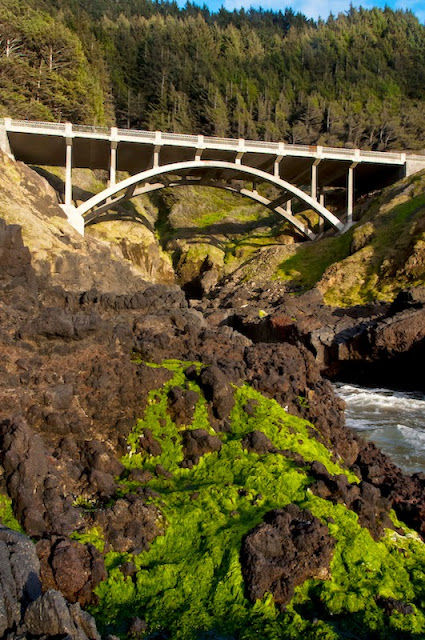 Below the bridge, the sea pounds dramatically against an extremely rugged shore. 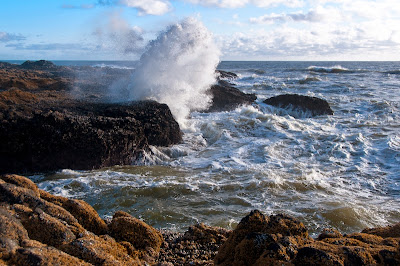 The rocks are a dark brown.  At low tide rich green vegetation is revealed in places on the rock. 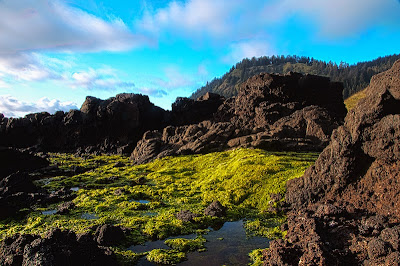 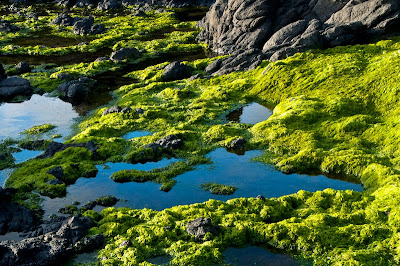 Wildflowers crop up everywhere.  This winter I photographed them in the deserts of New Mexico.  Here, on ground that is almost never dry, wildflowers again make themselves known. 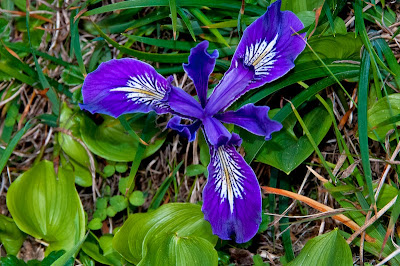 I don't want to imply that the entire shoreline is rocky.  There are magnificent beaches here, flatter and firmer than those on the east coast.  Last year, I took this shot of an approaching storm over South Beach. 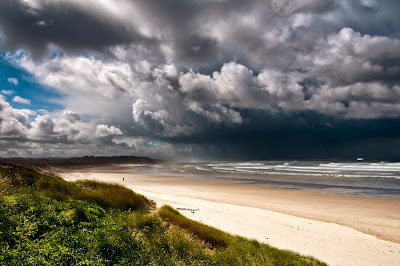 About 15 miles south of me is Seal Rocks.  At sunset, a thin film of runoff submerges the sands near rock outcrops, providing a mirror for the colors in the sky. 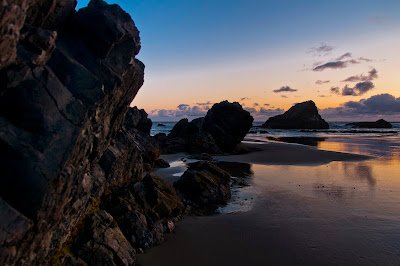 I had another shot to put in here, but Google automatically reprocesses photos, whether you want them to or not.  Their reprocessing ruined the shot.
Posted by Ken at 8:52 AM 3 comments:

I left New Mexico and worked my way northwest, visiting Meteor Crater and Valley Of Fire on the way.  My route took me along the Great Basin Highway and the Extraterrestrial Highway in Nevada.  There were times where I would drive for an hour without turning the steering wheel, or seeing another vehicle.

I made it to Oregon on time, and hindered down in Riley, waiting for clear weather to cross the Santiam Pass.  Each night, the pass was getting snow, up to 10", so I waited.

Wednesday, the forecast was clear, so I went up and over.  Here I am, perched above the MacKenzie River at my favorite boondock site. 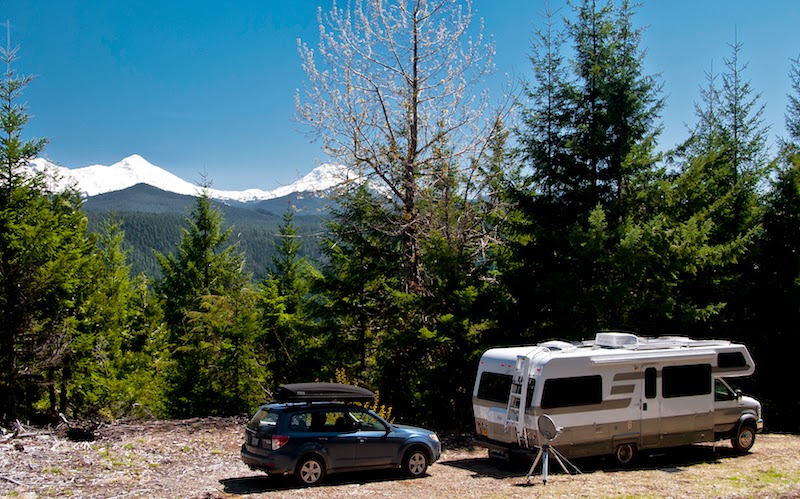 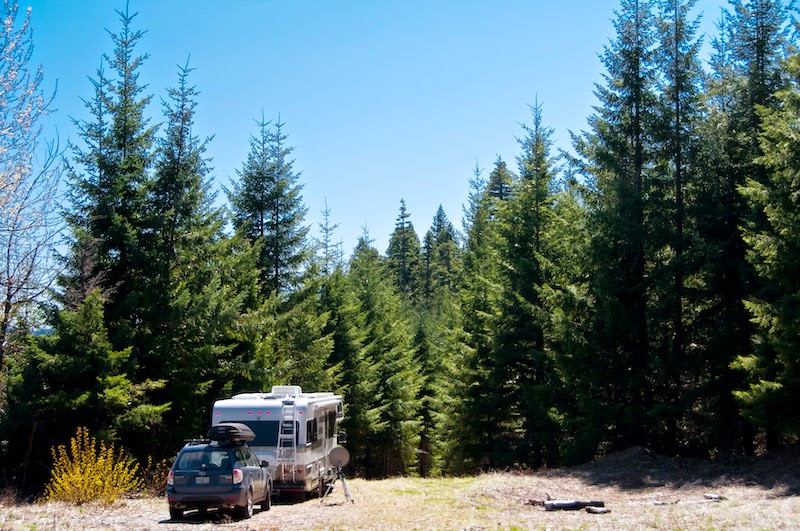 From here, I can make out Mount Jefferson to the north. 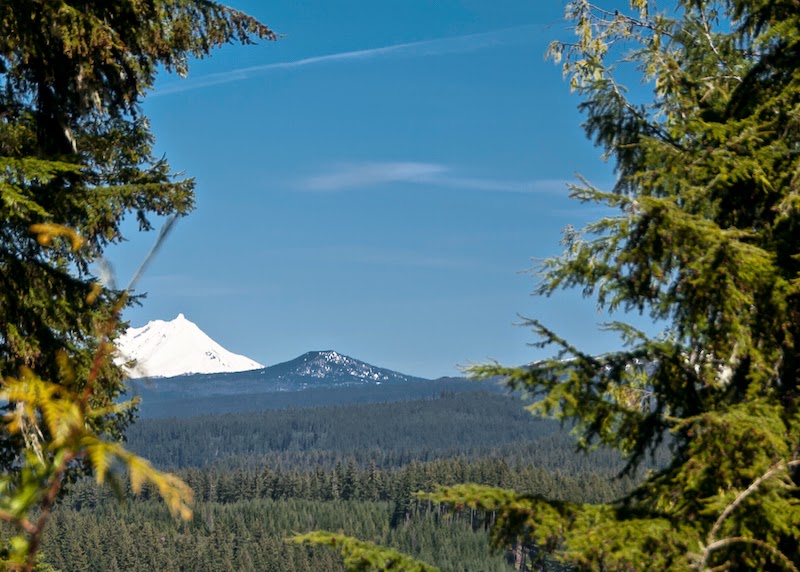 To the northeast, Three Finger Jack and Mount Washington are visible. 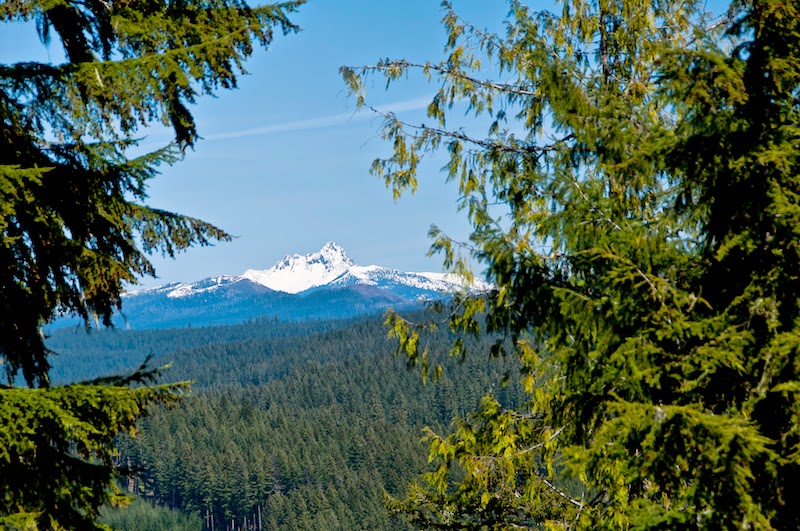 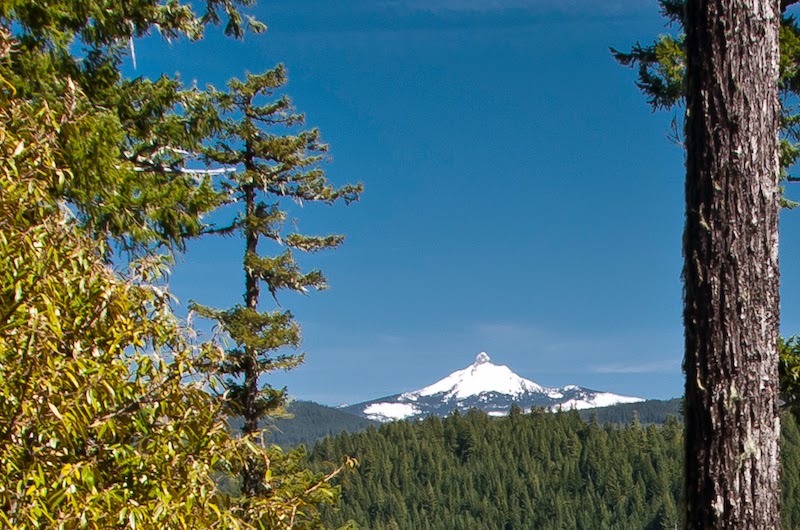 The best view, though, is to the east, of the Three Sisters. 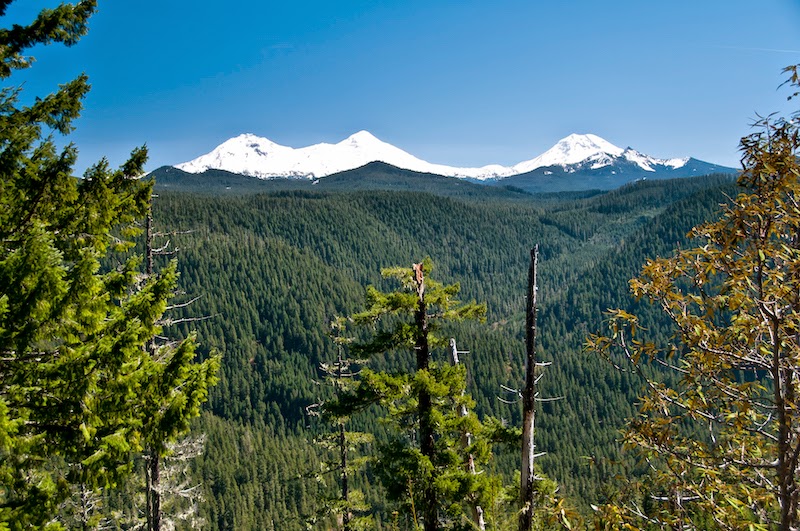 Ken
I am a retired civil engineer. For most of my life, I designed roads and worked to improve their safety. Now it is time for me to explore them. My focus in this blog will be to share where I am and what I am seeing, so that you may share to some extent in my adventure.